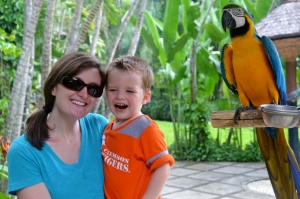 There are so many fun things to do in Ubud. Just to be out in nature, away from the city to where you only hear bugs, geckos, and the rain falling down was a much needed break for all of us.

We had been dragging the toddler around for days on different outdoor adventures and he was faring pretty well but we wanted to do something special just for him. Our hotel recommended we take a drive to the Bali Bird Park.  For around $80USD, we were given three tickets that gave us access to the bird park as well as the reptile park.

The Bali Bird Park has been around for a long time, almost 20 years now. There are a lot of birds that roam around the park, sit in the trees above you (watch out for poo), and some are in caged areas. The park has exhibits of birds from around the world such as Africa, Australia, Indonesia, and Latin America. They claim to have over 1,000 birds in the park from 250 different species. That is a lot of feathers! Bali Bird Park also prides itself on their conservation efforts of the local bird population.

There is so much to see during your visit but the best part is how the park is very interactive. I wouldn’t suggest you allow your toddler to run around chasing peacocks but it is pretty cool to look beside you and see a massive bird right by your face just checking you out. Another very cool feature is they allow you to take photos with some of the birds and the best part is instead of having to buy their photos (you can if you wish) they will take your camera or iPhone and take photos for you. If you plan on spending most of the day, which I think would be easy to do, there are shows almost every hour around the park highlighting different species.

shoulder and obviously the bird has claws. The bird wasn’t out to hurt Killi but the sharp claws scared him and our photo did not turn out so well. Killi kept crying “he scratched me” but don’t worry, there wasn’t a mark on him. Later in the day we found a few more birds to take photos with but learned our lesson and didn’t allow the staff to place one on the kid. That was a much better experience.

It had started raining during our trip but we found their 4D theater to watch a little show (with shows every 30 minutes). If you are hungry, the park has an open air restaurant with a nice play area for the kids to enjoy (there are signs that say there is a nanny on staff to watch the kids). The birds were beautiful, colorful, and in your face and the toddler really enjoyed it. 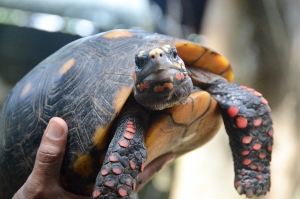 not really checking out what is around them but instead running through the park like a mad man? Killi was kinda like that when we arrived and decided we would be seeing the reptiles first not the birds. This isn’t a big deal since the reptile park is small and right beside the bird park. The reptile park does boast the most complete collection of reptiles in South East Asia with komodo dragons, alligators, crocodiles, pythons, vipers, cobras, lizards, and free range iguanas.

Maybe because it was the beginning of the day but the staff was very accommodating and was asking every time we passed by a reptile “you want to see it eat?!” followed by a price. “You want to see the King Cobra eat another snake? It’s a cannibal! It will only cost you.” “Naw…. This seems to be the stuff of nightmares and I would rather not deal with toddler cannibal snake nightmares tonight.” There is also a nice photo opportunity in the reptile park with the iguanas, same rules apply that you can pay for their photo or use your own camera.

This was a traveling toddler approved day!