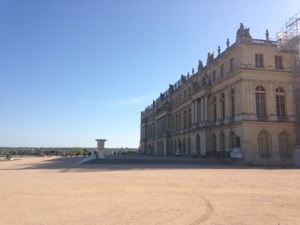 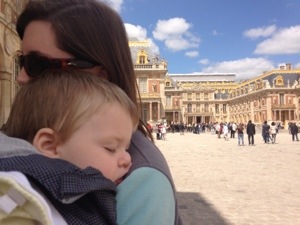 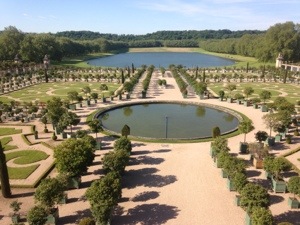 Don’t take your toddler. It’s that simple. This is a day trip that is best for just adults or toddlers that are old enough to understand to hold you hand and walk with you quietly.

We arrived at Versailles as soon as they opened. It wasn’t possible for us to make it there before they opened to wait in line but if you have that option and you can wake up early and get your family on the RER then do it! As we were walking up to the palace we saw a line of people that we thought were tour groups gathering together but as we got closer we realized that was not the case. An employee saw that we were confused and offered to help. We asked if this was the line and she confirmed it was and that Sunday is their busiest day. Our pass worked to see the gardens as well so I asked if it would be better to see the gardens and then come back to the line in the hopes that it would have thinned out by lunch time. She says we can do that and that there is a music and water show at the fountains starting at 11am. Great!

We make our way into the gardens and it isn’t crowded yet and we now have to kill two hours waiting for this awesome show to start. Eleven o’clock came and so did the “show”. Basically the fabulous music and water show was someone turning on the stereo and blasting classical music throughout the gardens and turning on the hosepipe. We waited two hours for this?! Don’t get me wrong it was pretty but we have learned a lesson and that’s just go straight to the palace first.

After a quick bite at the restaurant in the garden we go get in line. At this point the line is so long that it has snaked around the courtyard about 4 times, when we arrived in the morning there was only one big line. Again lesson learned. The line looked to be about an eight hour wait but in all reality we waited about an hour. As we get to the front of the line we discover that you can’t take strollers into the palace. Say wha?! My kid doesn’t just walk around and at the moment we have to turn in our stroller he is asleep. Awesome.

Since Master Killian is a little king to us, Chris and I took turns carrying him throughout Versailles. Sucker is heavy! As the herd of people moved along the little walk way in the palace Killian is relaxed so we think okay this isn’t so bad we can sort of look around while he is resting on us but then as we make our way to the more heavily crowded areas Killi wakes up and there is no way we are going to hold him now. It’s so crowded and all Killian wants to do is run. We are now at the point where you can’t really enjoy the palace because we are having to wrestle an alligator with all of these people looking at us with their judging eyes because our son is begging to be cut lose! Blah.

Versailles was beautiful and I wish strollers were allowed so we could have had more time to explore and appreciate what we were looking at but alas that was not in the cards for our visit.

Travel Tips:
1. The line isn’t as bad as it looks.
2. When they say water and music show in the gardens dont think you are getting a big show!
3. Sunday is the busiest day to go! It’s basically a cattle call so do yourself a favor and go another day.
4. If you do go the gardens first and you are with a child let them run all of their energy out in the garden and maybe you can carry a sleeping kid throughout the palace.

Sorry the pictures aren’t that great but it was hard to take any pics while having to hold onto Killian.

This entry was posted in Paris and tagged Paris, traveling with a toddler, Versailles. Bookmark the permalink.