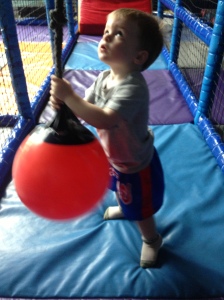 A reward of funarium after a hard week at therapy!

I probably won’t post about every week of the program but I wanted to share some exciting events during this week and reassurances from our doctor that has me thrilled about this journey we are on.

During our first week, Killi’s doc wanted to work with him without the nanny or I in the room. So for Monday-Wednesday, Odie (our new and awesome nanny) and I sat and read for about two hours in their guest room. Killian, the doctor and his staff played inside and outside with the other children and really had a great time! On Thursday and Friday, we had rain in Bangkok and there was a little flooding at the institute so we couldn’t sit in the guest room so we were more involved in the play therapy. Killian’s progress after one full week is astounding.

Turns out Killi does consider the doctor an authority figure and responds very well if I am not there (he doesn’t even notice when I’m not there) but when mommy and Odie are in the room the doc can’t really get any of his objectives accomplished. So for next week I will give them Monday and Tuesday without mommy and will then join towards the end of the week. This is very hard for me to not be there but I told the doc whatever it takes. He said he will send me homework to continue to work with Killi at home. Luckily, me not being around is only for a few sessions.

We work for two hours at the institute everyday and after nap time Killi and I work for the rest of the afternoon until bedtime. It is a very full and tiring day but man does it pay off. My son now takes my hand, says mom and shows me what he wants/needs help with. He can actually play little games now, just little high five games but he interacts and looks at me and is seeking a response. He says dog very clearly when asking to see the dogs at the institute. He waves bye and blows kisses on command now. He pointed to the tree (he doesn’t point normally and this is a huge step for his communication) and said tree. When he wants his apple sauce pouch opened or to see a movie he will bring it to me and say please. He is babbling, which is his talking, a lot more during all play activities.

There has been more exciting things that have happened but to be honest this week has been a blur. The doctor said to me, what Killian has done this week is the equivalent of what he normally sees after 4 weeks of therapy. With that being said he will be revamping my sons developmental objectives and stepping it up next week. I can’t wait to see what happens next week!!

I know this opportunity and finding the resources here to help Killi is a huge blessing for my family but I didn’t realize how lucky we really are to have gotten in with the Reed Institute. Turns out Killian’s doctor turns down 7 out of 10 families that come seeking help for their children. He only picks the people that he truly believes will put in the work at home to help make the difference. I guess he could see my desperation and willingness to do anything to help my son when I first spoke with him! Thank the good Lord!

He says with Killi’s progress so far he will soon be out of a job but I told him not to worry we can use the sessions to teach Killian Shakespeare and maybe at this rate he will. I said if he can get him quoting Shakespeare I’ll gladly pay double!

This entry was posted in Surviving Autism and tagged Bangkok, ESDM, Thailand, the reed institute. Bookmark the permalink.