We celebrated my sons 2nd birthday while in Krabi and for a special surprise we decided to take him on a trip elephant trekking through the jungle.  Sounds like a great idea doesn’t it!?

Travel Tip:  When booking your excursions in Krabi they may say that these events are half day but in all reality, they are not.  They are about forty-five minutes to an hour long with an hour or two of travel time.  This would have been fine had it been in the description.  Instead, they lead you to believe it is a legitimate half-day event…

We are picked up from the hotel in the pouring rain and start to worry that this adventure might be canceled because of the weather but after waiting about forty-five minutes (keep in mind this time spent waiting is all part of your half day experience) for the last two people to arrive.  We finally head to Tiger Cave Temple.  This is a Buddhist temple located in Krabi.  The sign located in the top of Tiger Cave Temple explains the origins of the temple, it reads as follows:

“This area to the tiger cave and the area of the lower cave entrance courtyard was, in previous times, the location which a tiger used to seek refuge and sleep in the morning sunlight.  At times the tiger would let out a ferocious roar.  This caused people, who came to the forest to collect items or hunt for animals and heard the tiger’s roar, to begin calling the area, “the Tiger Cave”.

Later, the venerable Luang Por Jumnean Sellasetso, chief monk of the Tiger Cave Temple, led a group of Buddhist monks and nuns to live there and practice dharma.  In B.E. 2518 or 1975 A.D., with the monks and nuns having come to live in the area of the tiger’s retreat the tiger *migrated* in the direction of the Phanom Mountain Range which extend from the tiger cave hills and crags.  Since that time to the present, no one has ever seen the tiger.”

*can’t make out the word- see photo below

Just a guess but there probably was never a tiger just some legend that was made up but it is always interesting to see what others believe.  When you walk around the grounds you will see some construction going on to part of the temple but if you walk away from the cave you come to a staircase that goes up the mountain.  I tell Chris this is why we are here because when you climb the thousand stairs located at the top is a huge golden Buddha and a beautiful view.  We are kind of disappointed because we were only given forty-five minutes to explore the area and there is no way we are climbing that many stairs in that amount of time.  So instead we try and climb up some to see what we can see and thank the good Lord that we didn’t attempt the thousand stair hike because after two hundred stairs I had cramps in both calves and Chris had Killi on his back and my kid is a chunk so you can imagine that would be difficult!  The only problem going up that many stairs is that you have to go back down.  Even though we didn’t make it to the top we did have a beautiful view and a photo op. 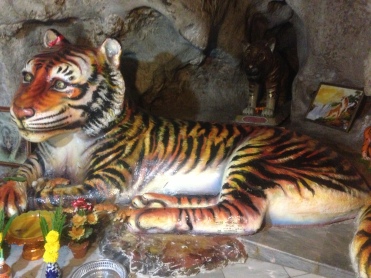 the tiger located in the cave

the sign explaining the origins of Tiger Cave Temple 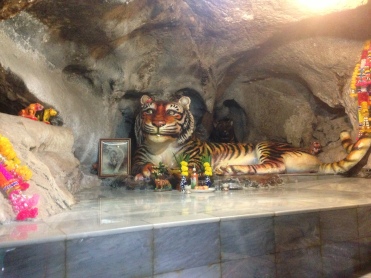 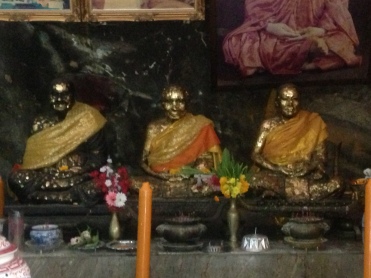 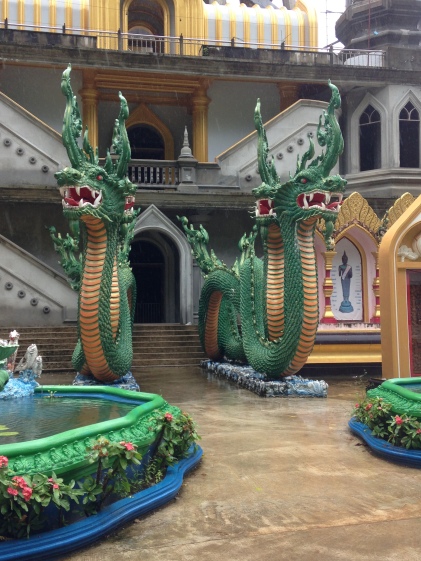 a tree with metal leaves that had the imprint of Buddha 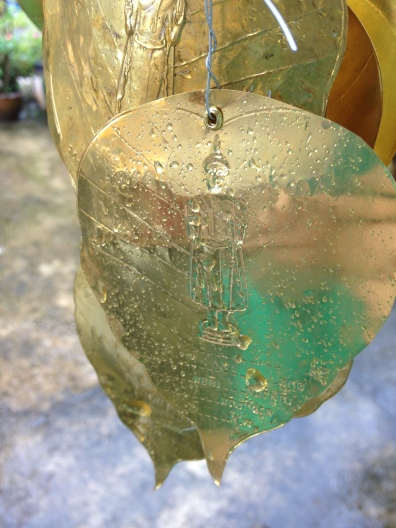 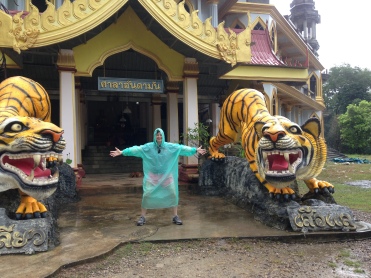 i love thailand is covered in topiaries

this is at 200 stairs and we thought we would die

After a quick trip to the Tiger Cave Temple we were off to the “jungle” for some elephant trekking.  Chris and I were pretty excited about this and to see how our son would react and Killi did not disappoint!  At first, he was a little nervous but as soon as he sat between Chris and I on the elephant he was very still and held on to the rail on our laps for dear life.  Although our guide wasn’t fluent English he was able to point out different things on our trek, for example the durian tree, rubber and palm trees and some other Thai fruit we eat but I can’t remember the name.  My two year old had enough at about 30 minutes and had a meltdown while on the elephant so we had our guide take us back to the base.  When back from our ride we were given the opportunity to feed the elephants bananas.  Killian had an amazing time and to be honest we have never seen him so happy, the pictures below speak for themselves.

After all the other people from our group were back we were treated a baby elephant show.  Her name was dewdrop and preformed some impressive tricks!  It was an amazing birthday and the half day excursion was just enough for a toddler that is still in need of nap time. 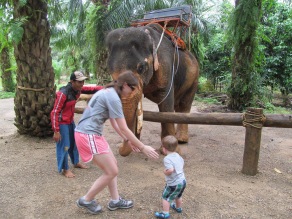 he isn’t sure about this elephant 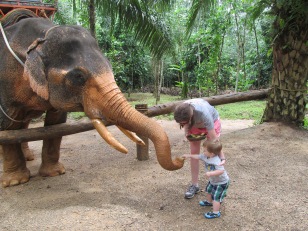 he starts to get the hang of it

holy moly dad this is awesome! 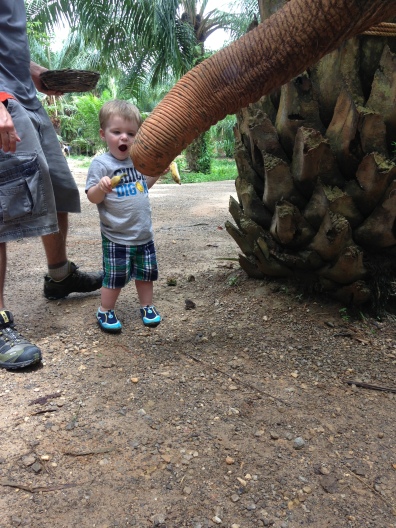 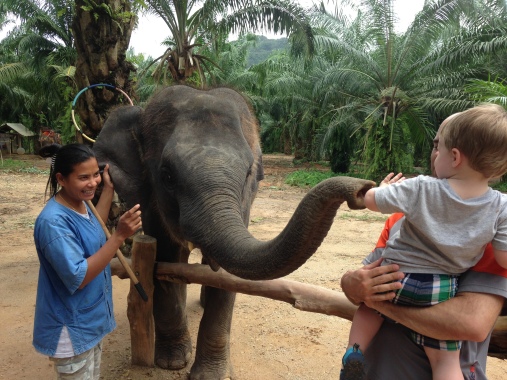 kisses from the baby elephant and yes she made a big smack sound! so cute!